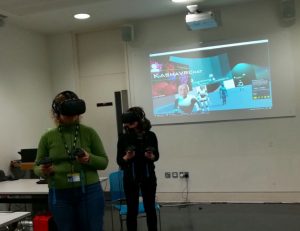 Last Wednesday’s symposium launched with dance moves, back-flips, and greetings of “Hey, how are you? Can you hear me?”

It was Central Saint Martin’s first ever symposium in VR, and the excitement was more than palpable – it was embodied in real and virtual space. The program was hosted by the MA students in the Arts and Cultural Enterprise program (MAACE) in partnership with UAL’s Digital Maker Collective and was developed as a prelude to Tate Exchange 2018.

Many of us in attendance were the participant-learners who had conceived of and contributed to the space. We are students in CSM’s first accredited distance-learning program, and we connected across continents via WhatsApp texts, Skype conversations, SLACK threads, VRChat and in-person workshops to plan this event. Our enthusiasm, unencumbered by physicality, was as expressive and experimental as the technology itself. 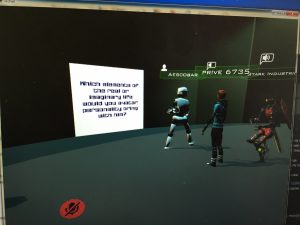 From Hong Kong, London, San Francisco, and Auckland, our lively avatars gathered with others’ in the symposium hall. VR-related movies played in the background and thought-provoking billboards floated overhead:

“VR as an educational medium.”

“Art school of the future.”

“A new generation of digital natives.”

Our guest speakers were Dr. Pete Rive, lecturer in Creative Technologies at Auckland University of Technology, and Savraj Matharu, faculty from Westminster School of Media, Arts and Design.

Rive and Matharu discussed with our group the potential of VR as an educational medium.  In arts education, VR functions as material for collaboration, and the collaborative output is also the educational setting. VR’s fluidity of function results in emergent learning for students and educators alike, which creates academic relationships that are more dynamic than in a traditional cla 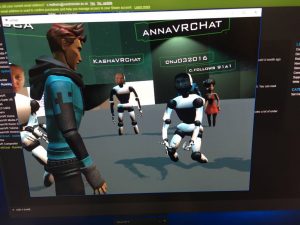 This idea led us to explore, conversationally, the psychology of embodying an avatar. Frequent VR users may have multiple avatars with different personalities. This phenomenon also has potential to impact educator/student relationships.

Matharu shared that students who are active gamers tend to relate to the educational VR space as though it is the same as a gaming environment. The gamer perspective could be leveraged to incentivize learning, but it also has the risk of trivializing the educational experience.

Just as it is possible to embody different avatars in VR, the possibilities for new worlds are endless. Rive described student-created worlds that are based on genres, such as horror, science fiction, or comedy. Students invite audience members to engage in their genre world, and then map the audience experiences into a narrative. So, the students evolve from designers to documentarians and from architects to storytellers. 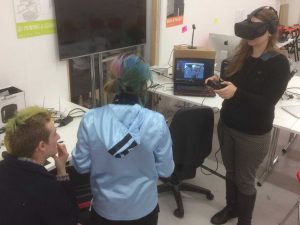 The rich conversation continued for nearly an hour, with examples ranging from digitized choreography in VR to virtual tourism and ecology. Our enthusiasm never waned. As we glided and bopped around the space, we clamored to share ideas and ask questions even in the last few minutes of the program.

We’re looking forward to the next iteration at Tate Exchange 2018. And we’d love to hear about your experiences in VR. Comment here or join us on the 5th floor of the Tate Modern, 5th-11th March 2018! 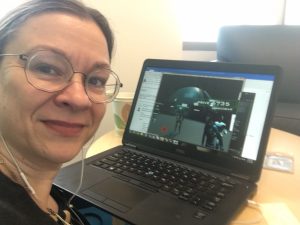